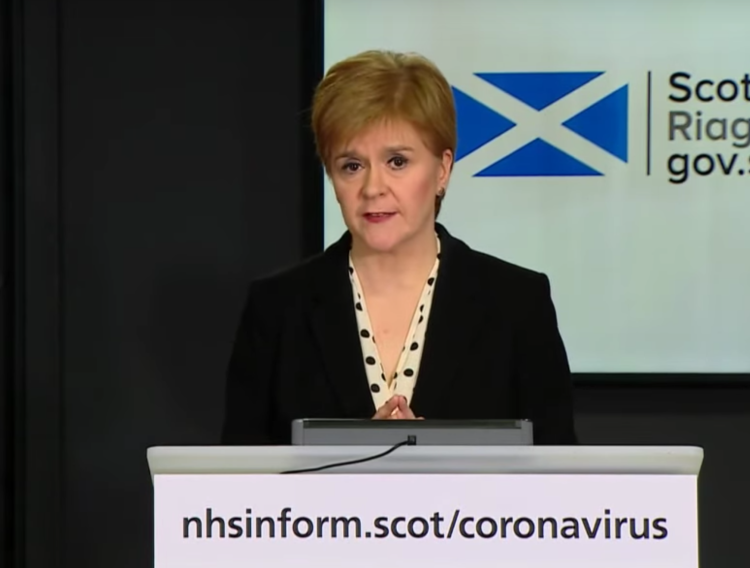 The ‘four nations’ strategy on Covid-19 was only going to last so long.

Tensions have been showing for some time but a point of departure is now evident. With its new ‘stay alert’ slogan the UK Government is edging towards an exit strategy while the First Minister believes it is too soon. She says her government’s motto remains ‘stay home, save lives’.

Scotland is beginning to go its own way on coronavirus. This need not be a bad thing. The all-important ‘R’ number, the rate at which the virus is being reproduced from human to human, appears to be a little higher north of the Border. Scotland also has its own demographic trends and distinct health needs.

A bespoke national strategy might be able to cater for those in ways a UK-wide approach would not. A national strategy, not a nationalist one. The First Minister has assured the public her primary focus is tackling the virus. The priority is saving lives and, if Scotland coming out of lockdown a little slower does that, then it is a tack worth pursuing.

A divergent strategy and ongoing lockdown cannot be about politics. Over the weekend, national clinical director Jason Leitch told a radio programme: ‘Recreations like tennis, golf and angling will be some of the first things that come back. We are not there yet and the optics are part of it. We have single-parent families locked inside, so we need to be careful.’

The impact of lockdown on physical and mental health as well as the economy is not a matter of ‘optics’. What is a matter of optics is any suspicion that the First Minister is delaying a return to normal life until she can tick all the right-on boxes. If golf or any other sport becomes safe again, it should be allowed.

Another concern to address is that constitutional politics has nothing to do with rhetoric about the ‘border’ between England and Scotland. Even a whiff of opportunism to advance the separatist agenda off the back of a deadly pandemic would render sulphurous in the nostrils of the voters. Now is not the time for Sturgeon the tactician. Sturgeon the leader is what the country needs.

In leading Scotland down a different – even marginally different – path to the rest of the UK, Sturgeon must be careful to take the population with her. Something the First Minister has not done well enough is explain the differences in rules between Scotland and the rest of the country. Whether she likes it or not, some Scots still look to the UK Government for leadership and cannot understand why the Prime Minister and First Minister are not saying the same thing.

Take the Great British garden centre, for instance. Wales is reopening them from today and England from Wednesday, throwing a lifeline to harassed parents desperate for anything to keep the children occupied.

In Scotland, however, these unlikely parental oases will remain shuttered. As with the construction industry, the First Minister has taken a more cautious stance – but she has not explained to anyone’s satisfaction why activities deemed safe in Durham are potential virus-spreaders in Dumfries.

The other factor which has, predictably, been sidelined in Scotland is the economic avalanche heading our way.

Lockdown has saved lives but there is going to be a cost. Artificial mass unemployment has been fashioned by the advice to businesses to close and by Chancellor Rishi Sunak’s job retention salary scheme. Both necessary measures, both with a hefty price tag all the same.

Economists forecast a worse recession than the slump that caused the Great Depression. The Chancellor is funding his job support projects with £2trillion of borrowed money. Eventually, the piper will come calling for payment. Part of treating the public like grown-ups is having a grown-up conversation about what this borrowing and suppression of economic activity will mean for the fiscal long-term.

For one thing, we had better brace ourselves for tax rises because they are going to be top of the political agenda. Further austerity is not an option given how much was already cut by George Osborne and a heightened untouchability that will attach to the NHS and social care budgets.

If anything, spending is only going to rise as we emerge from the crisis. Expenditure on virus control, laboratory capacity and mental health services can be expected to climb. Councils will likely have to forgo business rates, or at least make do with much-reduced revenue, to allow small and medium-sized firms to get back on their feet. The First Minister has indicated her sympathy for a universal basic income in light of Covid-19, a policy with an annual bill of £20billion.

Where is the money coming from? There will no doubt be calls for a hypothecated NHS tax, or a wealth tax, but the pressure will be on, too, for increases in income tax across the brackets.

A slog lies ahead and some who have lost jobs or businesses will not get them back. The spectre of middle-class unemployment looms.

How we address these challenges will fall at least in part upon Nicola Sturgeon’s shoulders. In making her own way on virus suppression, she will also have to make her choices about rebuilding Scotland’s economy.

She is calling the shots now and she will have to account for them to a frightened and frustrated public. She has been given extraordinary leeway in handling these matters. The message from the Scottish Conservatives is that politics-as-usual is suspended, which is reasonable.

While BBC Panorama got stuck into the UK Government over PPE provision, BBC Scotland offered up an intimate portrait of the coronavirus ward at Monklands Hospital. No other head of government in the UK is benefiting from the kind of goodwill Nicola Sturgeon is receiving.

Going it alone on suppression of coronavirus is a major gamble for the First Minister. She is drawing on deep, but not unlimited, reserves of public trust. She must not let us down.

If you are suffering the travails of home-schooling, spare a thought for those trying to parent in a pro-independence direction. One mother in Dumfries and Galloway was incensed after her daughters’ school suggested an ‘inappropriate’ activity.

The woman, who wished to remain anonymous for reasons that are about to become apparent, complained that the headteacher had encouraged pupils to put up Union Jacks in the garden to mark VE Day.

The distraught matriarch decided to share her concerns with a newspaper but, perhaps being unable to reach one, spoke to the National instead. ‘I would never buy a Union flag as I support Scottish independence,’ she explained. ‘I don’t think the words “Union Jack” should be used as schools are supposed to be politically neutral.’

The activity, which wasn’t compulsory, was part of a twice-weekly ‘headteacher’s challenge’, the council said. Not good enough for the patriotic parent, who agued that it was ‘like telling children to celebrate something not in their religion’.

There are some people you’re relieved to be socially distanced from.

Enraged social media users are posting cameraphone videos of families ambling through parks and youngsters gathered in town centres. As more such evidence of insubordination emerges, please remember only to leave the house for the five essential reasons: food-shopping, travelling to work, medical care, exercise, and filming strangers on suspicion of unauthorised strolling.