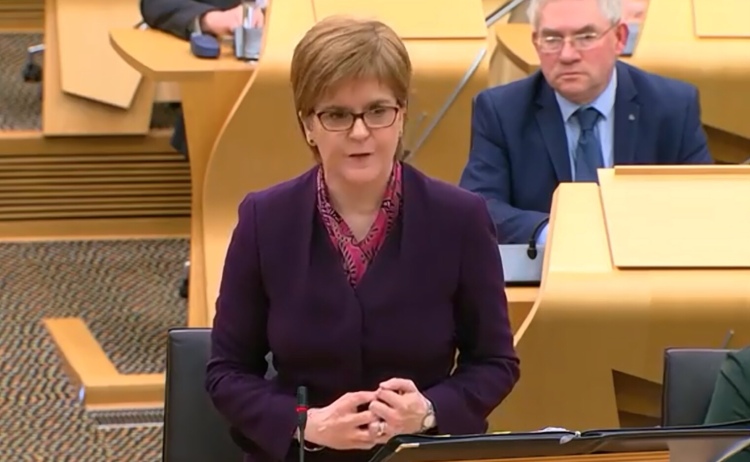 The solitary joy of election campaigns is when politicians and journalists encounter the voters, those strange creatures they shelter from in parliaments and television studios the rest of the time.

The voters are an unreliable sort. They don’t conform to the message grid, ask all the wrong questions and actually expect answers. These are people blissfully unaware of how the game is played. Some of them don’t even watch Newsnight.

I have been on the campaign trail lately and, as you might expect, Brexit has come up on the doorsteps. Some want it done, others want it undone, but most are heartily sick of hearing about it. Few gave the impression of living and breathing the issue the way politicians or those of us who write about them for a living seemingly do.

One man who lived in a very nice house in Ochil and South Perthshire told me he was doing okay but had yet to hear a candidate say what they would do for those much worse off.

What there is scarce demand for is more process. The political class loves process because it places them and their decisions at the heart of the drama. The agitation for repeat referendums on settled constitutional questions is, in part, driven by sheer narcissism. It’s infinitely more interesting to spend your days debating parliament’s purpose and your duty as a parliamentarian than it is to trudge through the minutiae of pension reform or transport policy.

Nicola Sturgeon, never one for policy detail, offers a bumper year ahead for process enthusiasts, with her advocacy for both a second Scexit and Brexit referendum in 2020. At First Minister’s Questions last Thursday, the Nationalist leader made clear her preference for the votes to take place in that order. After all, if another EU referendum resulted in a Remain vote, Sturgeon would be robbed of her current pretext for re-running the 2014 plebiscite.

It may come as a shock to the London commentariat who gush over their ‘progressive’ heroine but Sturgeon is far too busy trying to drag Scotland out of the UK to save them from Brexit. The people it will not come as a shock to are the voters. They have seen enough of this First Minister to know what her priorities are and to know that they are not among them.

Of course, there are those who want another vote on one constitutional proposition or another, but Sturgeon is arguing for something very few Scots want: a series of referendums, with all the attendant division and uncertainty. Make no mistake: though she backs two more referendums, the reality could feasibly end up closer to four.

After all, the First Minister’s hectoring for a confirmatory referendum on Brexit gives her opponents grounds to demand a People’s Vote of their own in the event that a second ballot on separation went in favour of Scotland leaving the UK. How could the First Minister deny them when she has already made the case herself, albeit in the context of Brexit?

Let’s allow, for argument’s sake, that Scotland would vote to leave the UK in a second and third plebiscite. That would not be the end of it. At the point of the UK’s formal withdrawal from the EU or Scotland’s secession from the UK — whichever came first — Scotland would be outside the EU. Sturgeon and her party are committed to EU membership and, while they could pursue it without consulting the electorate, doing so would fly in the face of the SNP’s rhetoric about the ‘sovereignty of the Scottish people’.

Referendums as far as the eye can see is enough to inspire horror in even the most energetic advocate of popular democracy. Not only would it leave the country in constitutional limbo for several more years, but the kind of issues voters are bringing up on the doorsteps in this election would again be shunted to the sidelines.

Your priorities may be the Herculean trials involved in securing a GP appointment or ensuring your child can learn a musical instrument at school or navigating the latest spool of red tape spun around your small business. But as long as we remain a country rapt by constitutional navel-gazing, your priorities will struggle to get a hearing.

Whether we have another referendum or another four, we will be in for more months and years of debating how government should work rather than what government should do. The economic growth that we need to create jobs and fund our public services will go on eluding us because, however much we despair at all this instability, foreign investors despair a great deal more. The outcomes we care most about (a fairer society, better opportunities for young people, improved care for older Scots) will be the things we do the least to achieve.

For activists and ideologues, this is all so much pedestrian pabulum. These are people with their eyes on the history books and the righteous fires of certainty burning in their breasts. They have the revolutionary’s zeal and the parochialist’s field of vision.

What they also have is Nicola Sturgeon on their side. She will do all it takes to get as many referendums as she needs, even put the abhorrent Jeremy Corbyn and his ranks of communists and antisemites into power. This does not endear her to the voters.

My election travels confirmed what I had already heard from SNP and Tory activists alike: Nicola Sturgeon is Marmite on the doorstep. Those who love her love her but those who dislike her do so vividly. There is no refuge in dismissing the latter as aversion to a strong, successful woman — in my experience, it is often women in whom the SNP leader inspires the most visceral contempt.

It would be better all round if we had a lot less of both devotion and contempt in our politics. Neither worshipped nor despised, our leaders should be there to get on with the people’s business. Cutting waiting times and helping small businesses grow may not flutter the heart; no one will ever lead a march or write a folk song about them. But these are the things that matter and it’s high time they mattered again.

Fergus Mutch, the SNP’s candidate in West Aberdeenshire and Kincardine, got himself into trouble after boasting in his election literature that his was a ‘real Scottish party’. This prompted criticism from Conservative incumbent Andrew Bowie.

Bowie has cause to worry about Mutch, currently rocking the Tweed-clad country gent look on the campaign trail. Back at Holyrood, where he is the Nationalists’ chief spin doctor, it’s a running joke that he is one of the most right-wing members of the SNP, often despairing at the latest headline-generating hijinks among the radical grassroots.

Bowie has a majority of 8,000 and will be hoping his prominence — he served as Parliamentary Private Secretary to Theresa May — as well as his endeavours on behalf of the local community are enough to see him returned.

Mutch will hope his moderate views can peel away enough liberal Conservatives. Oddly for a two-horse race, the result feels like a foregone conclusion. We know a Tory will win — we just don’t know which one yet.

It’s heartwarming to read that people in Scotland raised almost £4million for BBC Children in Need this year. The programme, presented with aplomb by favourite of this column Jackie Bird, is a reminder that you don’t have to go halfway around the world to find youngsters in poverty and despair. We all have a duty to show we care and Scotland has certainly done that.