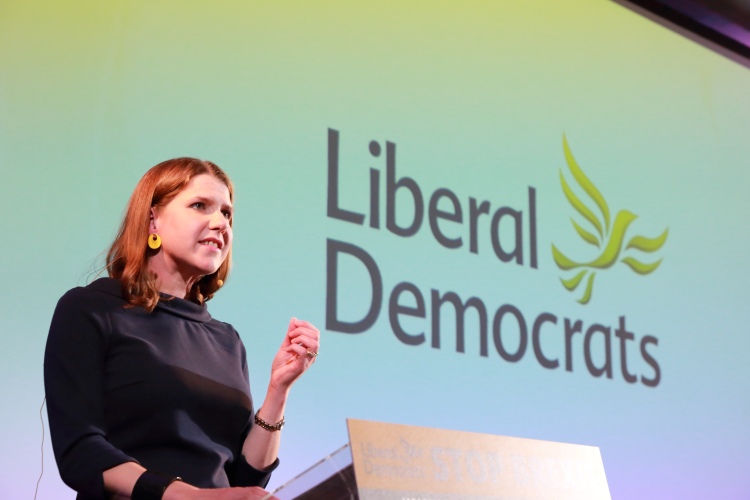 Jo Swinson has had quite the summer.

She was elected the first female leader of the Liberal Democrats, became the face of Britain’s anti-Brexit movement, and was even touted as caretaker Prime Minister of a government of national unity. All I got was torrential rain and stung by a wasp.

Amid the chaos, there hasn’t been much in the way of long-term reflection. Swinson has been appointed her party’s standard bearer at a time of unrivalled political turbulence, when opportunities to reshape the electoral landscape are plentiful.

Swinson is focused on stopping Brexit, and no wonder: this stance, whatever its merits, has helped bring the Lib Dems a polling bounce, a handsome result in the European Parliament elections, and victory in the Brecon and Radnorshire by-election.

There is still more mileage in the anti-Brexit juggernaut, especially if the UK ends up leaving without a deal on October 31, and Swinson will be trying to hoover up as many Labour and Tory Remain voters as she can before then. In the end, though, she won’t stop Brexit. The people voted for it, they would vote for it again, and British politics will not move forward until it is delivered.

Swinson’s potential, instead, centres on one word: realignment. As Steven Fielding, professor of political history at Nottingham University, recently observed: ‘[D]espite everything they say, there is something more important at stake than preventing a no-deal Brexit. For the ultimate prize coveted by Swinson and Corbyn is the right to lead the opposition to the Conservatives and – who knows? – come out the victor after the election everybody assumes will be held this autumn.’

The notion that the Lib Dems could supplant Labour as the Official Opposition has gone from science fiction to ‘what if?’ drama, a wildly ambitious production but one that could prove a hit with audiences given the right circumstances. It was once deemed unthinkable that the upstart Labour Party could replace the Liberals as the main anti-Tory force in British politics, at least until the 1922 election when JR Clynes’ socialists did just that.

Nowadays, what is unthinkable doesn’t have to be thought — it’s happening before our eyes. Donald Trump is in the White House, Boris Johnson is in Downing Street, Jeremy Corbyn is Clynes’ unlikeliest successor and the UK is leaving the European Union. The old certainties are being upturned everywhere you look. Then there is the small matter of the polls, the latest of which puts the Lib Dems just two points behind Labour.

This is the Lib Dems’ moment but if they only sit back and savour it, the moment will be squandered. The party is more buoyed than it has been since the heady days of 2010 and Cleggmania but some insiders are busying themselves on the practical questions of where the party goes next.

A senior Lib Dem tells me: ‘Jo made the right call in knocking back the Corbyn offer to lead a unity government. We all held our breath a bit, waiting for a Remainer backlash, but when that didn’t come and the polls didn’t sink it became clear that pro-EU supporters trust us more than Jeremy to plot the right course on Brexit.

‘That’s starting to be true on indyref2 as well. The softening of Labour’s resistance to a second border poll is upsetting a lot of the pro-UK supporters they had left. These two factors open a colossal space in the centre for us and with the Tories desperately trying to save the seats they have and being dragged down by Boris we can see growth opportunities in places we’d long given up on. Something’s definitely happening.’

Of course, they all say that. But there does seem to be a shift in mood, a growing exasperation with Labour’s Brexit mind games and revulsion at its treatment of Britain’s Jewish community. There is a gap in the market for a party that reflects the shift away from politics as a fight between left and right over economics to a struggle over social and cultural values waged by progressives and traditionalists — the woke versus the weary.

For Swinson, the ambition is to nudge Labour aside and claim the progressive mantle. It is a daunting challenge and an historic opportunity. There is, however, a second realignment on offer: the chance to shake up Scottish politics and form a competitive centre-left rival to the SNP. Scottish Labour can no longer fulfil that role for a variety of reasons, not least that Jeremy Corbyn and John McDonnell have both made clear they are open to giving the Nationalists a second referendum on separation.

This leaves the pro-Union field dominated by the Scottish Tories, a party that some disaffected Labour voters just couldn’t bring themselves to vote for. By replacing Labour, there is always the risk that the Lib Dems could split the pro-Union vote but they are a very different beast from Ruth Davidson’s party and might draw away left-of-centre voters disillusioned by the SNP’s poor delivery on the domestic policy front.

A rejuvenated Scottish Lib Dems would cause Nicola Sturgeon another headache: here is a pro-Union party unadorned by the baggage of Brexit. There would now be two sizeable blocs at Holyrood taking on the SNP grievance machine and making two distinctive cases against independence from different political traditions. The Nationalists could find themselves in the middle of a pro-Union pincer movement.

Swinson’s position as the only Scottish leader of a pro-UK party at Westminster is valuable too. She has been MP for East Dunbartonshire since 2005, except for a brief blip between 2015 and 2017, and understands how Scottish politics works, how the SNP operates and how decisions taken at Westminster can tread on political sensitivities north of the Border. She might prove to be a secret weapon for the Unionist cause.

Realignment is a lot to ask of a leader who has been in the job five years, let alone five minutes, but the opportunities are there for Swinson if she is prepared to take the necessary risks. If she leads the Lib Dems to outnumber Labour on the green benches, she will go down in history as the party’s greatest leader. If she only manages a realignment in Scotland, she could still help oust the SNP from government and rescue the country from the sclerosis of nationalism. Her summer may have been eventful but what happens next will define Jo Swinson and UK politics for years to come.

What can you say about a civilisation that sets fire to its own lungs? The Amazon rainforest produces six per cent of the world’s oxygen supply and yet it is currently engulfed by more than 2,500 separate fires.

It is a man-made disaster but it is not a sudden one. Brazil’s forests have been ravaged by 75,000 fires in 2019, the highest number in six years. In the past eight months alone, these blazes have produced 228 megatonnes of carbon dioxide. That’s the equivalent of running 50 million cars for a year.

Well-meaning Westerners demand more action to cut global emissions. Emerging economies in the East ask why they should forgo the energy sources that made us so prosperous. On this impasse the fate of the world hangs.

The Earth doesn’t belong to us; we hold it in trust for the next generation. What a planet we will hand them. Temperatures rising. Icebergs melting. Oceans strewn with plastic. The air pumped full of pollution. We have taken Eden and turned it into a dump.

Boris Johnson is seeking legal advice on proroguing the House of Commons to force through Brexit. Last week, we learned that Holyrood’s £12.6billion fiscal black hole is more than half the entire UK deficit. If the Prime Minister wants to shut down a parliament, he might want to look a little farther north.