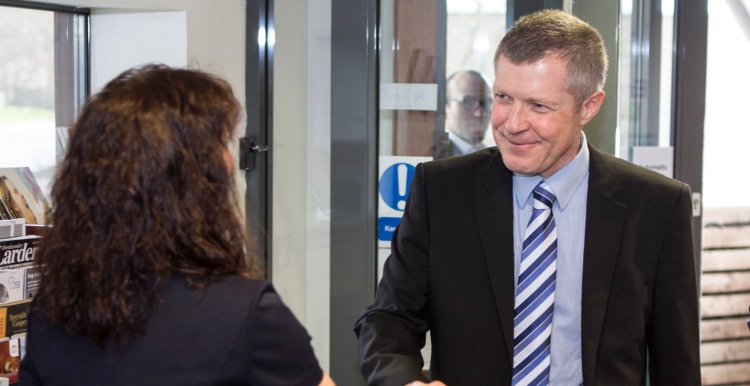 I had never thought about Willie Rennie in a fuchsia twin-set, blue-rinse perm and diamante-studded glasses and I had hoped to keep it that way.

Then, at First Minister’s Questions, the Lib Dem leader had to bring up the SNP’s efforts to revive Indyref 2 off the back of the Euro elections.

‘Nicola Sturgeon’s election letter to me, which was addressed, “Dear Edna,” did not mention independence,’ he noted.

‘What is that saying about being always a dame?’ Sturgeon shot back. Hello, possums!

Richard Leonard, in theory the leader of Scottish Labour, wanted the First Minister to step in and save closure-threatened Caledonian Railway Works. Given that it’s in bad shape financially and has Scotland in its name, many will have assumed the SNP was already running it.

Leonard complained that company bosses had offered the depot to the Scottish Government free of charge but had been told by Transport Secretary Michael Matheson: ‘We don’t do nationalisation’.

Matheson, perched two seats away, began thundering at Leonard: ‘No! No offer was made!’ while shaking his head vigorously. It’s his most memorable contribution in eight years as a minister and he didn’t even have to get out of his seat.

Sturgeon said it wasn’t true that Nationalists don’t nationalise, pointing to Prestwick Airport, which has combined the very best of capitalism and socialism by charging twenty quid for parking and offering a flying experience reminiscent of early Seventies Czechoslovakia.

Leonard pressed on but he’s so soft-spoken that the only way to be sure he’s talking is to check if Labour MSPs are paying absolutely no attention. Throughout his questions, Jackie Baillie swiped away at her iPad like a Line of Duty polis about to nail a bent copper. Every time Sturgeon spoke, though, she stopped and looked up.

Lefty firebrand Elaine Smith had a right old go at the SNP’s record on poverty and when a familiar cry of ‘but Westminster…’ went up in response, she came back: ‘We all know the damage that Tory austerity and cuts are doing, but I want to talk about the First Minister’s policies.’

Smith reminded the Nationalist boss that back in March she had promised an update on anti-poverty measures ‘before the end of June’.

‘I point out that it is now the end of May,’ Sturgeon replied, with a tone right out of Mean Girls. ‘There will be an update before the end of June, but we are not in June yet.’

Lunchtime beckoned. It was macaroni ‘n’ cheese day in the canteen but the carbohydrate exodus was interrupted by Mike Russell.

‘On a point of order.’ He rose and Jackson Carlaw’s face fell. Russell brandished a sheaf of papers like a winning lottery ticket. Willie Rennie had accused him of not mentioning a People’s Vote when he introduced the new Referendums Bill. The record showed that he had.

‘Given that the leader of the Liberal Democrats made an assertion that I did not say that yesterday,’ he purred at the Presiding Officer, ‘perhaps you would advise him of how quickly he could correct the record.‘

‘Ooooooohhhhh’ the Nationalist enclosure squalled, and gesticulated for Rennie to get up and withdraw. They were met with a dismissive flick of the wrist, which only spurred on more taunting.

The chamber got to its feet again, then Elaine Smith cried out: ‘On a point of order.’ Jackson Carlaw eyed up Maurice Golden’s forearm and looked around for salt and pepper.

Smith wanted to correct the record on her earlier question to Sturgeon. ‘I read it out wrongly,’ she conceded. The SNP leader had actually promised to ‘bring forward the update before June’. Smith added with feigned innocence: ‘That gives us one day.’

Now it was the turn of the opposition monkeys to rattle the bars of the cage. Did Sturgeon want to admit her own boo-boo? Reader, she did not.

At last it was time for lunch. On Jackson Carlaw’s face, a look of relief and joy.

One thought on “Dame Willie makes for an above Everage FMQs”