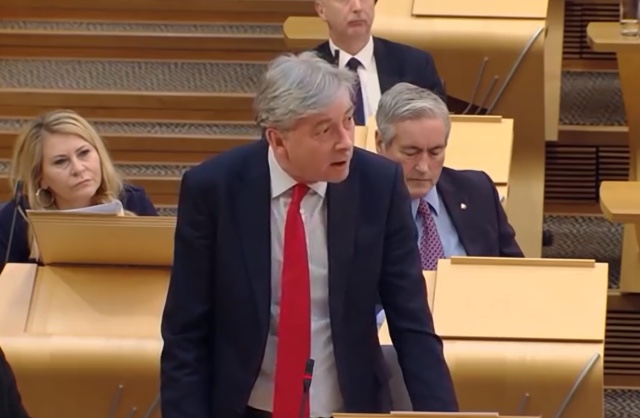 When I read last week that Allan Massie had defected from Labour to the Tories, I was baffled.

Scotland’s greatest living writer is no leftist; his fiery philippics against socialism once exploded from the pages of the Daily Mail. After retrieving my glasses, I was relieved to learn I had squinted an extra ‘L’.

It was, in fact, Alan Massie who had been tempted away by Ruth Davidson. The Aberdeen property tycoon was a Labour member for 30 years and had stumped up £400,000 in the last ten.

It is the latest indication that all is not well in the brotherhood of man. Days before Massie’s defection, Labour MP Ian Murray complained that his party was full of ‘thugs and incompetents’. No wonder former leader Kezia Dugdale is high-tailing it to a new job.

To add to her successor’s woes, a formerly supportive newspaper has switched sides to endorse the Scottish Greens for the European Parliament election. The Sunday Mail was once so Labour you could recreate the reading experience by skimming a Gordon Brown speech with a bacon roll in your hand.

That it has abandoned the party so abruptly augurs ill. Richard Leonard’s leadership campaign was predicated on the same argument as Jeremy Corbyn’s in Scotland: that a more radical party could win back voters lost to the SNP.

How is that working out?

In the most recent poll of Westminster voting intentions, Scottish Labour slipped below 20 per cent for the first time since the General Election. The party that won every UK vote in Scotland for five decades is now languishing on 17 per cent.

When it comes to Holyrood, the situation is even worse. Labour is currently on 16 per cent in the constituency vote, its worst rating in over two years. When voters were asked a fortnight ago how they would use their regional vote, Labour could call on only 15 per cent of them. Again, their lowest score in two years.

If this trend continues, the next Holyrood election won’t be about whether Labour can climb back into second place but whether it can cling on to third.

Seventy-seven per cent of Scots say Jeremy Corbyn is doing a bad job as UK leader. Only 39 per cent say the same of Scottish party chief Richard Leonard. On its face, that looks more encouraging but in fact only ten per cent believe he’s putting a shift in. The rest — fully 51 per cent — don’t know.

Leonard assumed the leadership a year and a half ago and a majority of the country still has no opinion of him. That, or they have no clue who he is.

Leonard strikes me as a decent sort: a man of high ideals, wants to do well by the downtrodden, reckons class matters more than nationality. I’m told that, behind the scenes, he is serious, unflashy and hard-working.

He is unfailingly courteous and respectful towards those he disagrees with, but he lacks the grit and steel of leadership. You could picture him as your colleague, your neighbour, your local lollipop man — just not your First Minister.

Were Scottish Labour led by Jackie Baillie or Jenny Marra, it would perhaps be in ruder health. The former visibly gets under Nicola Sturgeon’s skin and the latter’s passion and principle stand in contrast to the First Minister’s cold managerialism. Both would pose difficulties for Ruth Davidson too by stemming the flow of Union-minded Labour moderates over to the Tories.

But these are matters of the margin. Scottish Labour’s problem is one of purpose, not personality. It is no longer clear what point, if any, the party serves. The great opening up of politics that followed the centrist era hasn’t made politics more positive or idealist; it’s just given us a wider range of parties to hate.

We are all tactical voters now, casting our ballot to stick it to someone or other. Hate the Tories? Vote SNP. Hate the SNP? Vote Tory. Hate Brexit? Vote Lib Dem. Hate Brexit *and* the Union? Vote Green.

Richard Leonard’s party is homeless in this cosmos of contempt because, however much voters hate the other parties, it would never occur to them to vote Labour. Outside of the most tribal and bilious Nationalists, no one can summon up enough interest to hate the party.

The average voter thinks about Scottish Labour in the same way that Manchester United fans think about Plymouth Argyle: they’re aware it exists, but they’re not quite sure why.

Some insiders console themselves that this is all a function of constitutionalism. That, once the grievance nationalism that drives Brexit and Scottish independence is defeated, all will return to normal and Labour can start winning again on economics and social policy. However, the fundamentals of politics are shifting and Brexit and Scexit are merely symptoms of these changes.

In England, Labour’s traditional base — the low-paid, semi-skilled working-to-lower-middle-class — is peeling off to the Tories and, at present, Nigel Farage’s Brexit Party. The Tories, while happy to pick up voters in the north and the midlands, are haemorrhaging high-income graduate professionals to Labour. British politics appears to be realigning along a US-style cultural fault line in which electors vote on their ‘values’ not their material interests.

If you favour multiculturalism, worry about the environment, and think gender is a rainbow spectrum, you’re more likely to vote Labour. If you prefer national institutions to international bodies, fear that free speech is under threat, and hold traditional views about family life, you are more inclined to support the Tories.

The problem for Scottish Labour is that it has already lost much of its base. The public sector professionals began drifting to the SNP in the mid-2000s and post-industrial west-central Scotland followed after the 2014 referendum. Their divergent cultural and economic instincts are met by a party that has modelled itself — without acknowledgement — on the broad church built by New Labour.

That coalition is rocked by infighting at present but these conflicts are not to Scottish Labour’s advantage. The first order of hostilities is between independence gradualists and true believers, neither of whom are going to decamp to Labour any time soon.

The second pits the majority who want a moderately social democratic state against a loud but small minority who dream of running a red flag above the saltire on day one of independence. Scottish Labour has nothing to offer either of them.

Of course, Labour could switch sides on the constitution but there is already a party for leftist supporters of separation. Labour members will be familiar with it from the front page of yesterday’s Sunday Mail.

If there is little scope for Scottish Labour to recover its electoral coalition, there is still plenty of opportunity to lose those voters who have stuck with it. The most recent polling of Labour supporters shows 45 per cent think Ruth Davidson is doing a good job, with 43 per cent saying the same about Nicola Sturgeon. (Richard Leonard managed a less-than-gleaming endorsement of 24 per cent.)

Some Labour hold-outs might have been softened up by the SNP’s lean leftwards on tax. A few more tilts in their direction could be enough to bring them on board with the Nationalists. Many, however, are firm believers in the Union and unwilling to budge.

These are sitting ducks for Davidson and part of the reason her party is doing all it can to downplay its Tory identity. To capture Bute House, Davidson would have to win SNP votes but picking off a clutch of Labour MSPs would be required too.

Whichever way it looks, Scottish Labour has nowhere to go and so it blinks helplessly at an existential crisis. It is a party without a purpose or a place in the very Scottish Parliament it founded 20 years ago. Twenty years from now, that parliament may well have outlived its creator.