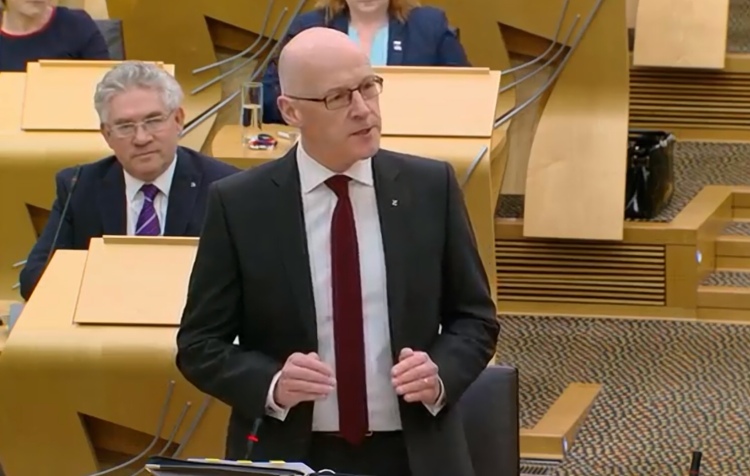 There are many ways to follow First Minister’s Questions: on television, online and, of course, in the next morning’s Scottish Daily Mail.

By far the most entertaining, though, is listening to Adam Tomkins’ mordant interjections throughout.

John Swinney’s first attempt to put a brave face on the car park tax was punctured when Tomkins piped up: ‘You don’t even believe in it’.

He even interrupted his own man. When Jackson Carlaw reminded MSPs that Finance Secretary Derek Mackay had neglected to do any economic analysis on the policy, Tomkins cat-called: ‘Now, there’s a surprise’.

It was all rather beastly to poor Mr Swinney, who genuinely doesn’t believe in the policy and was only standing in for the First Minister. She had been unavoidably detained by her own ego and was trotting around Washington DC pretending to be a head of state.

Bearing in mind she has all the foreign policy powers of a Turkish barber shop, it wasn’t clear why she couldn’t make the one occasion a week when parliament humbly requests her presence.

All the better for us, mind, because, before you feel a twinge of pity for the Deputy First Minister, know that he is a ruthless street-fighter. He makes Genghis Khan look like a social worker.

He produced a letter showing Carlaw had previously lobbied for more local decision-making. This prompted a thumping response: ‘This isn’t Blue Peter. One pathetic excuse that Mr Swinney made up earlier ain’t gonna wash.’

Carlaw added that we were getting the parking tax ‘because Derek Mackay, John Swinney and Nicola Sturgeon cannae say no to six dismal Green MSPs.’

You know Jackson Carlaw is ticked off when he starts dropping slang and contractions. Don’t get him angry or an infinitive will end up with a nasty split.

‘If that was not an audition for the next pantomime in Glasgow,’ Swinney revved up. ‘I have no idea what it was.’

The benches behind him loved that. Oh how they clattered their palms red raw in endorsement of his juvenile jabs. It’s been so long since they’ve been able to do that at FMQs.

Much of what came out of the Deputy First Minister’s mouth was baseless, blustering bunkum but it went down well with the footsoldiers. Better than Nicola Sturgeon’s performances have for quite some time. If I was her, I’d throw myself on Trump’s mercy and seek asylum.

Christine Grahame appeared to have arrived in the debating chamber via Woodstock and was sporting psychedelic lime-rimmed glasses and a purple haze brooch big enough to pick up a Grateful Dead concert from 1983. She was not feeling at all groovy, though, for those pills at Labour-run Midlothian Council were slashing music tuition for all pupils below secondary four.

An indictment of Derek Mackay’s ruthless budgeting? No, it was all Labour’s fault for introducing the private finance initiative, which had left Midlothian with a £10m interest bill and that was why they couldn’t afford clarinets. It seemed a stretch but the brooch was too hypnotic to doubt the logic.

Labour believed in ‘music for the few, not the many‘, Grahame snarked, adding: ‘My constituents and I will be demonstrating against those cuts outside Midlothian Council’s headquarters next Tuesday and we will certainly not be singing “Keep the red flag flying here”.

It was a classic bit of Grahamery: a pedestrian question asked in a faintly batty manner all the while daring you to try to make sense of it. Swinney agreed that Midlothian were a right shower and got his head back down sharpish.

A mention in despatches for John Mason, who got us in the mood this week with a pre-FMQs plea for councillors to be paid more. He noted that ‘Members of Parliament are paid some £77,000, Members of the Scottish Parliament get £62,000 and councillors get £17,000. That seems a bit uneven.’

Surely the more troubling discovery is that we’re paying any of them at all.