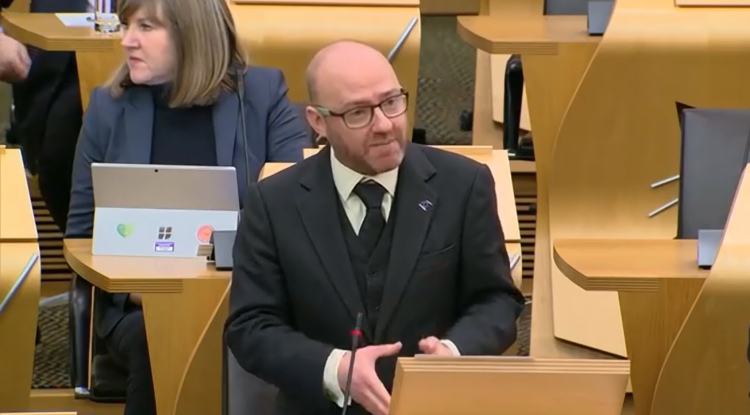 Fidel Castro used to deliver nine-hour speeches and have his political opponents shot.

Patrick Harvie tries to combine the two: during his 301-word question at Holyrood yesterday, some Tory MSPs took on the glazed register of people longing for a bottle of brandy and a revolver.

Mr Harvie does not mean to torture his opponents. He wants everyone to know he cares about Issues and so most of his questions are second year modern studies essays read aloud with the piety of a 13-year-old decrying animal testing.

How the lonely burden of virtue must weigh upon him and yet he perseveres, lobbing semicolons and parentheses into the air and filling the spaces around them with earnest monologue.

He seldom comes up for air but, then, who needs oxygen when your little chest heaves with so much righteousness?

Mr Harvie was in splendidly hysterical form at First Minister’s Questions. ‘There is a growing awareness that what we are doing to our world threatens all our futures,’ he vented. According to one authority he cited, ‘the collapse of our civilisations and the extinction of much of the natural world is on the horizon’.

Couldn’t we get through just one FMQs without someone bringing up Brexit?

But, no. In a surprise turn of events the leader of the Greens was actually talking about climate change. ‘Changing light bulbs and even cars will not cut it,’ he chided. ‘We need to change our whole economy.’

To which end, he outlined his proposals. My mind began to wander during the 17th volume but if you’ve ever wanted to live in a yurt and use the soybean as a unit of currency, you’re in luck.

The barter economy might be with us even sooner if the Finance Secretary gets his way. Two weeks before Christmas comes the Budget, when the only jingling bells will be tills crowbarred open by Derek Mackay to claw yet more tax from retailers.

Jackson Carlaw wanted to know who was on the naughty list for this year’s grab. The First Minister told him he’d just have to wait till the big day itself.

Former car dealer Mr Carlaw wants bonus cash from Spreadsheet Phil’s Budget used to cut business rates, making it one of two-dozen or so policies his party has called for this same pot of money to be spent on.

The Tories love Barnett consequentials but struggle with the key consequential that when you spend the money once, it’s gone.

Mr Carlaw tried to pin down the First Minister on her government’s tax plans and she in turn sought an answer for what his party would cut. This game of fiscal dodgems went on for a good 20 minutes until Mr Carlaw suddenly halted and warned Ms Sturgeon not to whack a brand new tax on households in exchange for Green votes.

The Eastwood Avenger can always be relied upon to remind our townhouse-dwelling First Minister of the financial trials of lesser mortals but Middle Scotland should take no comfort from his question. The answer it elicited was evasive and, in its contention that Scots taxpayers had never had it so good, ominous.

Speaking of wanton mercilessness, Richard Leonard turned in a thumping performance against the woman who constantly underestimates him. He asked her whether the number of specialist teachers for additional needs children had gone up or down on her watch. She ruffled around some papers then glanced hopefully at John Swinney.

‘I do not have that figure to hand.’

It was down by 122. Education, Leonard reminded her coldly, was her ‘top priority’.