Theresa May’s Manchester meltdown was unfolding on live television, like a particularly excruciating Fisherman’s Friend advert, and Nicola Sturgeon was watching nervously 200 miles to the north.

The First Minister fired off a tweet: ‘Spare a thought for those of us still to deliver our conference speech and now fretting about all the things that could go wrong.’ It was what Americans call ‘kidding on the square’ — cracking a joke but being deadly serious at the same time. For the SNP leader has still to get through her own conference, which opens tomorrow, and to say anything could happen would be an understatement in these volatile times.

Even hardened observers of Labour’s shameful embrace of anti-Semitism were repelled to see the historical truth of the Holocaust called into question at the party’s get-together in Brighton. Nor were a coughing fit and a security breach the only blunders at the Tory confab, given Boris Johnson’s crass quip about dead Libyans and Chancellor Philip Hammond’s flat, gruelling speech.

But even if the Nationalists manage to pull off their Glasgow gathering without incident, Nicola Sturgeon has every reason to fear the next three days. They come at a precarious time for the nationalist movement. It is on the back foot, on the wrong side of public opinion, and on the defensive against Ruth Davidson and Jeremy Corbyn.

At 3.20pm on Tuesday, Miss Sturgeon will take the podium at the SEC Centre on the banks of the Clyde and account for herself. Since last they met, she has been forced into a humiliating climbdown on her Indyref2 demands, found herself sidelined on Brexit by the UK Government and European leaders, and managed to misplace 21 of her MPs, including the Westminster leader, the chief whip, and a former First Minister. For this she has shown scant humility and even less regret. The party’s chief executive has not been forced to fall on his sword — sacking her husband would have made for some scenes at the breakfast table — and nor have the much-vaunted svengalis who advised the boss to the worst result for a winning party since 1955.

If all this wasn’t sobering enough, hark pollster Peter Kellner, from a recent essay on the fitful voting patterns recorded in the General Election: ‘The SNP is in even deeper trouble than the raw results suggested. YouGov’s data shows that only 55 per cent of people who voted SNP in 2015 stayed loyal this year. The other 45 per cent divided equally into those who voted for a rival party and those who stayed at home. Indeed, the SNP lost a higher share of its support to abstention than any other party with MPs in the new parliament. This high abstention rate is a sure sign of a party in difficulty.’

It is an extraordinary turnaround. The SNP has gone from an unparalleled position of strength to one of fragility and listless meandering in the space of two years.

Tuesday’s address is one of the most important Nicola Sturgeon will ever give. Her party is downcast, her ministry distracted. The Scottish Government, rudderless for five years of constitutional capering, is struggling to chart a new course. The years of inertia have taken their toll on health and education outcomes and before ministers can move forward, they first have to repair the damage they allowed to happen on their watch. Closing the attainment gap and getting to grips with staffing and waiting times in the NHS would go some way to restoring the SNP’s reputation for competence.

Even then, they would still struggle with what George Bush Snr awkwardly termed ‘the vision thing’. Unlike the former president, Miss Sturgeon’s predicament is not that she lacks a vision but that she can’t decide which vision she believes in from day to day. We have seen Nicola the Nationalist and Nicola Not-A-Nationalist; Pro-Business Nicola and Social Democrat Nicola; Humble Nicola and Helicopter Nicola.

This protean quality is nothing new in politics. Tony Blair was a master of ideological flexibility, adapting his message to suit changing audiences and shifts in public opinion. Of course, Mr Blair’s triangulations were among his stoutest strengths. They allowed him to pursue wealth redistribution while winning the votes of those from whom the wealth was being redistributed. There is no art to Miss Sturgeon’s mercurial poses. She is not charming the voters — she is running away from them.

What’s worse, the worshippers have put away their foam fingers and started to wonder if ‘Nicola’ — as they call her with cloying, spurious familiarity — is fallible after all. Miss Sturgeon embarks on party conference already in the dog house with fellow nationalists.

‘If the SNP renege on their existing mandate, many independence supporters will think twice before backing the party in 2021. Why vote for an independence party when they don’t bring about an independence referendum even though they achieve a mandate for it?’

The First Minister is well aware that her grassroots are growing restless and some are becoming openly impatient with her. This is a new phenomenon for the SNP leader and an ominous one at that.

Miss Sturgeon hides it well but the smell of fear is upon her. It’s there in the conference agenda, chock-full of the sort of motions previously kept off the table by wily party bosses. There is no surer sign that the top brass senses discontent amongst the rank-and-file. They can’t be allowed to talk about independence — the voters might be watching — so the hardliners will be fed a diet of red meat for three days. For the tartan Troops Out contingent, who loathe the Armed Forces and call the flag they serve under ‘the butcher’s apron’, there will be a debate on banning the Army from recruiting 16 and 17 year olds. For the anti-monarchists, a resolution on scrapping the Sovereign Grant, the mechanism for funding the Royal Family. And for those who absolutely must talk about the constitution — without uttering the dreaded I-word — there are multiple debates on clawing yet more powers for Holyrood.

The leadership might come to regret stuffing the schedule with so many Brexit debates, for Europe is at risk of turning into a divisive issue for the Nationalists. A large minority of them voted Leave in summer 2016 and events in Catalonia have soured more still on the European project. Bute House has been careful to redirect criticism of Spain’s heavy-handed policing to the UK Government’s failure to condemn it but many Nationalists, from the grassroots to the parliamentary parties, blame Brussels for not censuring Mariano Rajoy’s government.

If this is how the European Union treats a small nation seeking self-determination, an increasing number say, then we want nothing to do with it. One of the most senior figures to break ranks on the matter is Tricia Marwick, former Holyrood presiding officer and a party elder, who told a newspaper earlier this week: ‘Right now, I cannot see any advantages of being part of the EU when we have got its leaders refusing point blank to intervene and condemn the actions of Spain.

Although she was expressing a personal view, the retired MSP is influential with the membership and party foot soldiers will take notice of her comments. A gauge of the broader mood will be provided by EU-related conference resolutions and fringe events, where delegates will get the chance to air their grievances. The ‘independence in Europe’ policy remains safe for now (if quietly adapted for a post-Brexit landscape) but SNP chiefs will be fearful of increased Euroscepticism. Any cooling in Nationalist passion for the EU would further estrange Remain-voting Middle Scotland from the cause of independence.

Below stairs aren’t just grumbling about the constitution. The backbenches want to see a Leftwards shift on taxation and economics, some because they sincerely believe in it and others because they sincerely believe in holding onto their seats. The unforeseen return to the Labour fold of Left-wing and working class voters has spooked a party happier talking socialism than legislating it. These Nationalists want the First Minister to raise taxes on higher earners, boost state spending, and tick off other items on the Left-wing wish list.

Some of these she has already conceded. In a birl of U-turns, the SNP is scrapping the public sector pay cap, banning fracking, reviewing a 50p tax rate, and delaying air passenger duty cuts on a technicality. They’re in third place and have no leader but somehow Scottish Labour seem to be running the country. Other elements she will have to resist or see her government dragged away from the middle ground. On tax as on so many issues, the First Minister finds herself hemmed in on all sides. She must pander to the Left while reassuring the centre; keep separation on the table without actually mentioning it; use her powers to improve things but not so much that it undermines the case for independence; and oppose Brexit without sounding too pro-EU.

A decade of positioning itself as everything to everyone has left the SNP a party that can’t seem to please any of the people even some of the time.

This is the tragedy of Nicola Sturgeon, a First Minister blessed with vast powers but too afraid to use them — a nationalist with no ambition for her country beyond arid constitutional arrangements. In one sense, this is not her fault. Nationalism is a negative proposition: Scotland is not a normal country and can only become one by tearing up the Union. The SNP was made for breaking, not building. But a leader rises above self and party, confronts difficult facts and forces others to do the same. She could begin this process in her speech to SNP conference by following Theresa May’s example and apologising for her own electoral calamity. Then she could set out her vision for Scotland, one that represents all the people and not just sectional interests, and tell her troops the direction she will be leading them in.

If Miss Sturgeon is a disappointment from the promise-bearing beacon of the new politics who took over in 2014, there is at least a mind at work. The same cannot be said for the motley crew that surrounds her on the oak benches. In the Cabinet, and among those who think they ought to be in the Cabinet, mediocrity reigns. Health secretary Shona Robison has lasted longer in the job than someone with her record ought to. Then again, being friends with the First Minister has its perks.

Michael Matheson, who is in charge of justice in Scotland to the extent that anyone is, is a decent sort but hardly provides inspiring leadership during a time of crisis for Scottish policing. Even education secretary John Swinney, hitherto considered Miss Sturgeon’s most reliable minister, is becoming bogged down in the mire of underachieving schools. The First Minister and Prime Minister lob this unfortunate millstone: If either of them stood down tomorrow, there are no obvious and certainly no credible replacements.

That won’t cut the muster with the voters, of course. So spare a thought for Nicola Sturgeon when she appears on stage on Tuesday. Whether she realises it or not, this could be a speech that makes or breaks her future fortunes and those of the SNP. If she cannot show herself to be equal to the moment, if she will not put her country ahead of her party, if she continues to speak boldly and do nothing, it won’t be a comedian handing her a P45 — it will be the voters. 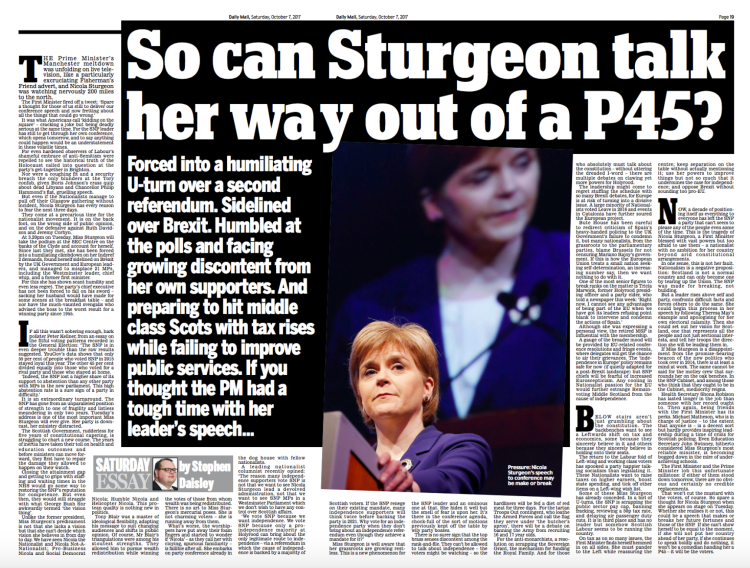