There is no rule that says all great things must come from Manchester, it just seems to work out that way.

The Warehouse City lays claim to some of England’s finest writers, from Jack Rosenthal to Howard Jacobson, and from its post-industrial streets emerged sounds to define generations of British pop. Without Manchester there would be no Joy Division and no Oasis and even the belligerent ghouls who once ran its schools made a contribution to our musical heritage.

Manchester is also the home of England’s great Liberal tradition, where the injustice and economic self-harm of the Corn Laws began to unravel. Keeping prices artificially high benefited the Tory mercantile class but left workers struggling to feed their families and mill owners pressed to meet wage demands. Pamphleteers like John Bright and Richard Cobden urged repeal in the interests of free trade and because they understood the alternative to reform could well be revolution.

This week Manchester is also the temporary home of the Conservative Party, which has decamped here for its annual conference. The mood is very different from this time last year, when a confident party gathered in Birmingham with the EU referendum won, a new Prime Minister riding high in the polls, and a Trot-seized Labour heading for annihilation.

Democracy always runs smoothly until the voters get involved.

The Tories are a party at a loss. They sense something has changed, an ominous mood is stalking the country. The dreaded mantra ‘time for a change’ is forming on the lips of the public. Prime Minister Theresa May is eager to avert this and will use her Manchester conference to plead for a second chance, from the voters and indeed her party members. The latter are in no mood for another election but the former have lost faith in her government. When the voters are asked which party ‘wants to help ordinary people get on in life’, ’stands for opportunity for all’ and is ‘on the side of people like me’, research by Lord Ashcroft shows Labour far outstripping the Tories. The Prime Minister’s party is now consistently outpolled by Labour and surveys show backing for a return to command economics and nationalisation.

Mrs May, who has spent the past year grappling with Brexit, has come to appreciate that it is only one leg of a triumvirate of challenges confronting Britain. The other two are moral questions that force us to decide who we are as a country and where we are going. First is the threat of Jeremy Corbyn becoming Prime Minister and the second, and intimately linked dilemma, is the collapse in confidence in the free economy.

The Labour leader would be a disaster for Britain’s economy but the graver danger is to our ethical integrity. What would we be saying to the world, to ourselves, if we were to elect as our premier a man whose long, lamentable career has seen him make common cause with the ugliest, most barbaric forces? Jeremy Corbyn is not a loveable red grandpa, doling out leftish aperçus with the Werther’s Originals. He is an extreme man with an extreme worldview. In handing him the keys to 10 Downing Street, we would become a lesser country, forever tainted by complicity. Decency demands that those who abhor terrorism, anti-Semitism and far-left extremism see to it that Mr Corbyn never gets into a position of power.

The rise in support for this shambling socialist scruff does not denote a sudden embrace of the IRA or Hamas by the British people. Nor do they wish to be grateful mendicants receiving handouts from would-be Chancellor John McDonnell. They are simply fed up with a sluggish economy and a lack of opportunities. Ten years on from the financial crash, they would like to move on from the penny-pinching sacrifices and have tired of ministers who seem clueless as to how to take the country forward.

The Prime Minister’s recent defence of the free market is a step towards addressing these concerns. A liberal economy, properly regulated, is still the best way to create prosperity and fund the public services we cherish. But the country is not interested in an economics seminar. The moral case for capitalism only works if capitalism works and its benefits are enjoyed by the greatest number. Many feel this is no longer the case.

Mrs May has grasped this angst but has still to work out an answer to it. Plans to cap tuition fees and invest more money in the Help to Buy scheme appear politically canny but their likely impact is questionable. Freezing the cost of university isn’t much of an offer when Labour is pledging to scrap fees altogether and it represents cash that arguably could be better spent on grant schemes. A boost in Help to Buy will help some looking for their first home but it does nothing to address the housing shortage, a national crisis that is no less pressing if ministers pretend it doesn’t exist.

The Tories should be the champions of an aspirational capitalism that holds out the prospect of opportunity and prosperity in exchange for hard work. Central to this should be restoring the possibility of home ownership to ordinary families. That would require an ambitious house-building programme to realise the Conservative dream of a ‘property-owning democracy’, which would in turn expand the middle class and give more families a stake in the economy. Opening up the housing market is not an easy choice and, like the repeal of the Corn Laws, there are vested interests ranged against it. But just as Manchester Liberalism succeeded in spreading prosperity and improving the lives of millions, there is an opening for Manchester Conservatism to do the same.

Manchester Conservatism offers a way forward — and perhaps the only way to stop Jeremy Corbyn in his tracks.

A wonderful parcel arrived in the post this week, amid the inevitable bills and junk mail. It was a copy of a new children’s book, ‘The Kelvinhill Kids Visit the Kelpies’, which tells the story of Iona, Fraser, Hiran and Grace on their first big adventure — a trip to the Falkirk-based sculptures that draw thousands of families a year.

It’s a children’s book with a difference, though, as the young heroes are all disabled. Disability campaigner Jamie Szymkowiak, a first-time author, hopes the book will provide positive role models for children with disabilities as well as helping other youngsters understand what disability means and how it affects someone’s life.

This glossy picture book presents junior readers with an endearing tale, complete with magical undertones, and would be at home on any early years bookshelf. In times when parents have to worry about what moral messages are reaching their children, here is a story that will teach them the most important value of all: respect.

The death of Hugh Hefner has sparked heated debate about whether his Playboy empire was a harbinger of sexual liberation, as his defenders claim, or exploitative of women, as feminists say. While not wishing to speak ill of the dead isn’t the truth that his whole set-up was just tacky? 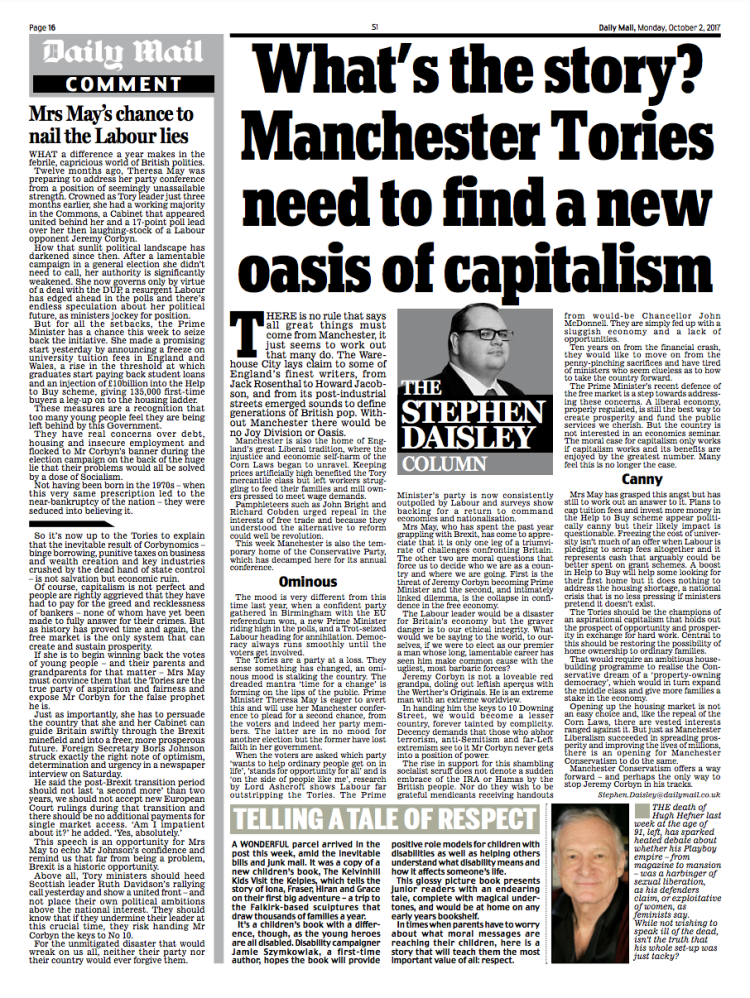