Scottish Labour gathered in Perth this weekend for a conference of firsts.

It was the first since Kezia Dugdale succeeded Jim Murphy (all the feels) as leader. It was also Jeremy Corbyn’s first as Comrade Number One of the UK party and he seemed to enjoy it, regaling delegates with tales of socialist sunshine and Salvadore Allende.

Confused? Imagine how the voters feel.

Labour’s gone to the dogs

This was my official conference pass. It was kindly arranged by Kezia Dugdale. Worryingly, at no point did security challenge me on it. 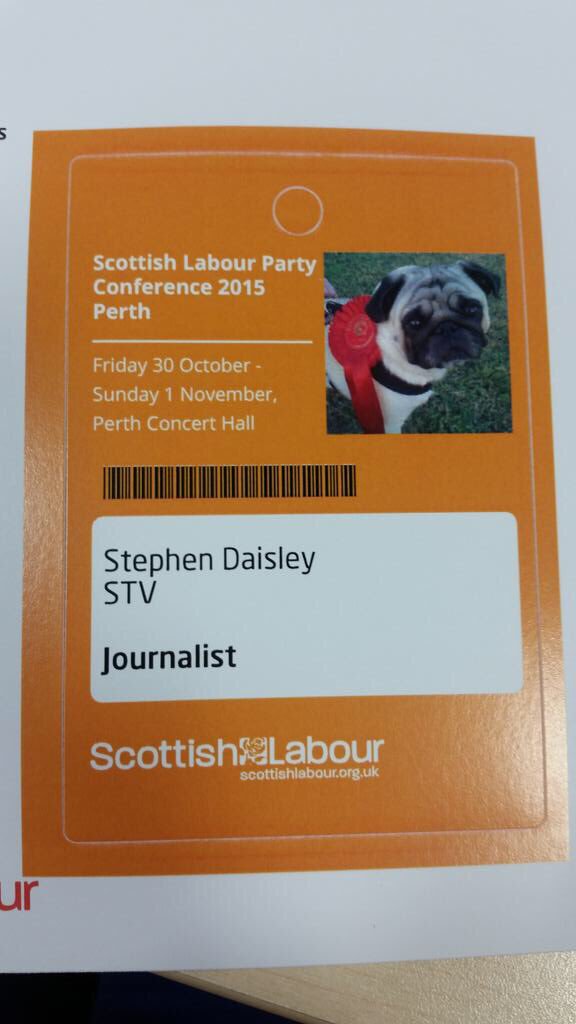 Friday night was pub quiz night. Party activists, politicians and journalists battled it out in a trivia contest hosted by Ian Murray, sadly minus his splendid Union Jacket. “Pub Quislings” appointed BuzzFeed’s Jamie Ross team captain. You won’t believe what happened next. Actually, you won’t because the Solero-pushing pixie struggled to keep our list of answers updated. When BuzzFeed’s star reporter can’t do a listicle properly, you know things are doomed.

The Daily Record’s Andy Philip (picture the middle Hanson brother after a tough paper round) sparked a schism that led to half the hacks breaking away to form a rival MSM team. Not that it mattered. Both lots of journos were left behind in the dust by a table of party smartypants.

Their prize? A branded Labour umbrella and a packet of crisps. That’s Austerity Britain for you.

‘You’re him off Twitter.’ I braced myself for a treason-themed ear-bashing then remembered I wasn’t at an SNP conference. Most folk wanted to talk about pugs and #HunkyJim. “I felt so bad for you when Jim lost,” one delegate offered in all sincerity, before patting my arm and giving me a sympathetic look.

And party members I knew only from Twitter kept sidling up to me and whispering, “I voted for Liz Kendall after reading your stuff” – as if we were exchanging microfiche in a dodgy cafe in East Berlin circa 1971. It’s always rewarding to hear your writing has an impact but there was no chance of me getting carried away. “Fat lot of f-ing good that did,” one trade unionist added.

Jamie Glackin was applauded out after his final conference as chair of Scottish Labour. Well-kent to the denizens of McTwitter, Jamie is one of those rare things in politics: A canny operator whom nobody’s got a bad word to say about. Even though he forgot to call for the customary three cheers for international socialism. Again.

Still, at least they had the traditional sing-song at the end.

The last time I was in Perth – for the SNP conference a year ago – I said it was “the town we must pretend is a city, a slate-grey, charity-shop studded conurbation left behind by the financial thrust of Edinburgh and the cultural vibrancy of Glasgow”.

A conservative commentator took me to task for the description, though the context was a point about unspoken poverty in Scotland and the need to tackle it.

I’m sorry to say the town-city has, if anything, gone down in my estimation. Transport is woeful, the main retail thoroughfare a one-street vindication of Amazon, and the few stores you might want to visit all seem to close at 5pm. Perth is dreadful at selling itself. It hides its light under a bushel and its bushel under a North Korean labour camp.

It’s a shame because it’s a lovely place really, richly historic, and the people are just my type: Flinty but good-hearted and utterly, joyously oblivious to anything Not Perth.

Christopher Rimicans was the star of the Trident debate. The 16-year-old party activist from Cunninghame South gave a barnstorming anti-nukes speech that had conference on its feet cheering. Whether you agree with his remarks or not, big things lie ahead for this guy.

I bumped into Duncan Hothersall. He was… nice. I… liked him. There’s another first for you.