Right from the start she was heading Left.

Nicola Sturgeon, suited up in Kremlin red, marched on stage to rouse the masses from a podium branded ‘progress’. The First Minister had got herself one of those radical visions that are all the rage these days. Socialism is now so mainstream they’ll be selling it in M&S soon.

A gag about coughing out of the way — she brought her own Strepsils, tossed them to Derek Mackay, then quipped: ‘I told you he was a safe pair of hands’ — Miss Sturgeon got down to business.

She promised a new Scotland, which is prudent since she’s done a right number on the old one, and what a Scotland it would be. The attainment gap in education would be closed, young people from poor backgrounds would get an equal shot at university, and the NHS would be knocked into shape. Finally, a government willing to roll up its sleeves and get on with the job. Not like that lot who were in power the past ten years. Useless, they were.

‘We will put Scotland in the driving seat,’ Miss Sturgeon kept saying. This was a none-too-subtle metaphor for independence though after she’s done carpeting the country in low-emission zones we’ll all end up stuck in the driveway.

This was mealy-mouthed stuff. She was here to declare a revolution and convince the workers that she, not Jeremy Corbyn, was their tribune.

The Scottish Government would be setting up its own not-for-profit energy company in the next four years. The residents of Ulva would get money to fund a community buyout. There would also be ‘the world’s largest floating wind farm, situated right here in Scotland, off the coast at Peterhead’. This was a canny move by Miss Sturgeon. She could promote renewable energy and keep John Mason busy working out if it was an island or not.

In the space of a few sentences, the First Minister had nationalised two islands and a power company. Beat that, Jezza.

Comrades in the public sector wouldn’t just get their consciousness raised but their pay packet too. ‘Next year, we will seek pay deals that are affordable but also fair,’ Miss Sturgeon promised. ‘The one percent pay cap will be lifted. We are the only government in the UK to make this unequivocal commitment. It is now time for others to do so too.’ Why oh why were these knuckle-draggers down south clinging to a policy so heartless it was abandoned by the SNP a whole 104 days ago?

Turning to world affairs, Miss Sturgeon intoned gravely: ‘There is now a battle of ideas underway across the globe. A battle between those who want to turn inwards and those determined to look outwards.’

‘Our party is internationalist to its core and it will always be so,’ she added, standing in front of a giant fluttering Saltire.

But the forces of darkness were close to home, too. ‘The gap between Scotland’s interests and Westminster’s priorities has never been wider,’ she prated, reminding her supporters that the Tories were obsessed with leaving Europe and ‘looking to the past’. A bold claim from the leader of a party founded on a 300-year-old grievance.

The SNP were the original Brexiteers. They don’t sing Scots Wha Hae anymore — all that servile chains and draining veins business is a bit off-brand in the new Scandi-and-skinny-lattes SNP  — and there was no mention of the Arthur Donaldson Memorial Lecture in this year’s agenda. (Mr Donaldson is a former party leader who was frightfully keen on Europe. Well, Germany. In the 1930s.)

But nationalism was still the order of the day, even if the First Minister wasn’t all that clear about what day she had in mind. There was no date given for the second referendum her deputy Angus Robertson had assured conference was on the way. Miss Sturgeon was noticeably vague: ‘We may not yet know exactly when the choice will be made but we can, we must, and we will always make the case for independence.’

It was one of just five mentions for independence in the speech. The audience applauded every one but there was a palpable sense that they wanted more. That is Nicola Sturgeon’s party piece. She waxes about how ambitious she is for Scotland. Not ambitious enough to do anything, mind, but she does have a firm commitment to speaking passionately about nice things. At some point, her impatient members might notice that she’s pulling the same wheeze on them as she is the country. 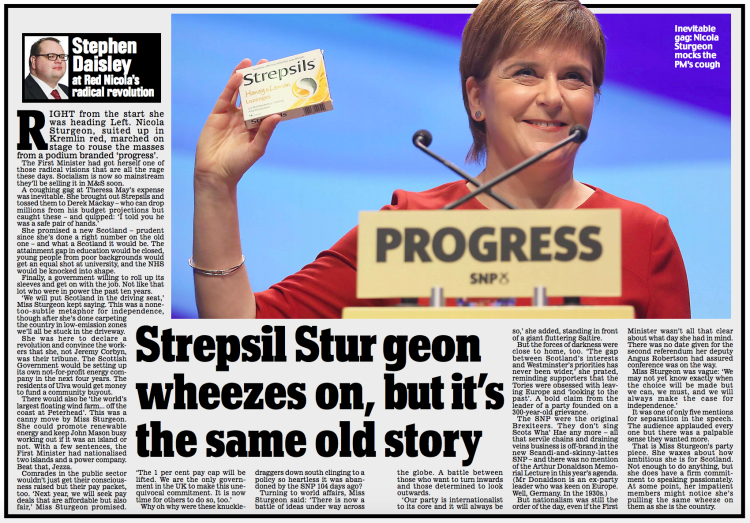