The Labour Party is like one of those grim kitchen sink dramas set in the Midlands and invariably starring Julie Walters.

The family home is a battleground of bad blood and betrayal. Fights erupt at random intervals. Grudges are so enduring even those who hold them no longer remember why. From time to time, the warring clan is brought together in common loathing of the swells who live across the street. Then, just when it looks like they’ve learned to get along, out comes one of them with an awkward revelation and they’re all back at each other’s throats again.

The latest plot twist comes courtesy of Tony Blair, the embarrassing uncle of the Labour psychodrama. In an article published at the weekend, the former Prime Minister urged his party to change course on Brexit, commit to the UK’s place in the single market and customs union, and hire an economics tutor for Jeremy Corbyn, Britain’s oldest Sixth Form radical. The new management were less than impressed by the old boss sticking his neb in. Mr Corbyn was outwardly polite, noting merely that ‘politics has changed’. As ever, the unvarnished version was on offer from Mr Corbyn’s social media footsoldiers. Left-wing journalist Owen Jones tweeted: ‘I see Tony Blair has taken time off from advising murderous dictators to try and sabotage Labour’s chances of winning the next election.’ Matt Zarb-Cousin, former Corbyn spin doctor, declared: ‘If Blair ever ended up in the clink I swear the drinks will be on me’.

Mr Blair is a tragic figure, an elder statesman in every country but his own. Half his party wants to see him in the Hague, the other half never wants to see him again. The Tories who once bragged about being his heirs are either gone or marginalised. This glum soap opera should be a matter of private grief but the futility with which a former Prime Minister addresses his own party is indicative of how Brexit has turned politics on its head.

Mr Blair was a vocal supporter of a Remain vote in last year’s referendum and continues to campaign against the outcome. He acknowledges that the voters believe ‘Brexit means Brexit’ and ‘there is no groundswell for a second referendum’. Still, he laments that his Labour comrades ‘are essentially for the same policy as the government’ on withdrawing from the single market. Instead, he wants pro-Europeans to stick to their guns: ‘Politics today are volatile and unpredictable. In these times, best hold to what you believe. The centre may appear marginalised; but in the hearts and minds of many, it simply needs to be renewed.’

It’s been a dizzying few years in politics but few things are as disorienting as the apparent body switch between Mr Blair and Mr Corbyn. The former won three elections by taking Labour out of its comfort zone, making peace with swathes of Tory policy, and treating public opinion polls like stone tablets just down from Sinai. While he was doing all this, the latter was counselling doctrinal purity and muttering darkly about the perils of populism. Now Mr Blair is the ideologue, preaching strict adherence to long-standing Labour policy on Europe, while Mr Corbyn is a triangulating pragmatist who sees Brexit as his best chance of making it to Number 10.

True, the Bennite has long been a quiet, cowardly Eurosceptic but because he thinks Brussels is a capitalist conspiracy, not for any of the reasons that dominated the Leave campaign’s case during the referendum. Like his embrace of controlled immigration, welfare cuts, and shoot-to-kill — and his toleration of a pro-Trident pledge in the 2017 manifesto — Mr Corbyn’s Brexiteerism is a pursuit of power over principle. The ease with which he dissembles about his support for the IRA is a masterclass in spin of which Alastair Campbell would be proud. Mr Corbyn’s leadership pitch was that he would restore Labour to its pre-Blair roots. In truth, he has erected an unconscious tribute to his nemesis’s brand of politics, a mirror image of the pandering and spin Mr Blair’s critics believe he embodied. Jeremy Corbyn’s party is Even Newer Labour.

Among my infinite repertoire of unpopular opinions is admiration for Tony Blair. I am one of those merry partisans — I hesitate to use the plural — who reckon that for all his faults he was a good’un. But even those who disagree with me (such people tend to be known as ‘the majority’) ought to acknowledge his insights into politics and the European scene. Particular attention is deserved for this aperçu: ‘If a Right-wing populist punch in the form of Brexit was followed by a Left-wing populist punch in the form of unreconstructed hard-Left economics, Britain would hit the canvas, flat on our back and be out for a long count.’

Even I think Mr Blair is underestimating Britain’s potential but then potential is a poor measure of prosperity. My old granddad would reminisce blackly about his 1920s childhood in the Coatbridge ‘Slap-up’, a poverty-sunken estate named for its slipshod construction. ‘The summers back then were so hot, you could fry an egg on the pavement,’ he would regale me. ‘Of course, we didn’t have any eggs.’ Prudence demands that we give serious consideration to Mr Blair’s warnings but that virtue has been notable by its absence of late. Conservatives, who are meant to be in the business of restraint, agitate like student revolutionaries for liberation and the overthrow of ‘the establishment’. Socialists, whose songs and sermons romanticise internationalism, pursue withdrawal from our continental neighbours with almost as much vim as the Tories.

Whatever your view of Brexit, Mr Blair cannot be faulted on his central thesis: The shouty fringes have had their say and it’s time common sense and moderation returned to our politics. Whether we Brexit, deBrexit or cook up some terribly British fudge in between, we could all do with a little less of the kitchen sink drama.

You’ve heard of method acting but now we have ‘Do As I Say, Not As I Do’ Directing. Tub-thumping filmmaker Ken Loach attacked Radiohead this week for their decision to play a gig in Tel Aviv. The director demanded the Brit rockers conform with a fashionable cultural boycott of Israel. Radiohead are known for their Left-wing politics but admirably wanted nothing to do with pernicious efforts to isolate the Jewish state.

The anti-Israel crowd once again declared Mr Loach a hero of the Palestinian people. Then Guy Shani stepped forward. He distributes Mr Loach’s films in one particular country — Israel. He told reporters: ‘We’ve been showing his movies for years. I have been paying him money every year. His latest film I, Daniel Blake has been really successful in Israel… It seems that Ken Loach feels himself exempt from the cultural boycott.’

It was painful to watch Mr Loach’s fan boys handle the news. Mind you, not as painful as watching one of his turgid movies.

Delightful news that Labour leader Kezia Dugdale and the SNP’s Jenny Gilruth are an item. Love really does conquer all if it can overcome the rancour of Scottish politics. No doubt they’ll still bicker like other couples. ‘You forgot to take the bins out.’ ‘Stop talking down Scotland.’ I hope they’re very happy together.

Originally published in the Scottish Daily Mail. Have your say on the issues raised here by emailing scotletters@dailymail.co.uk, remembering to reference the column. Contact Stephen at stephen.daisley@dailymail.co.uk. 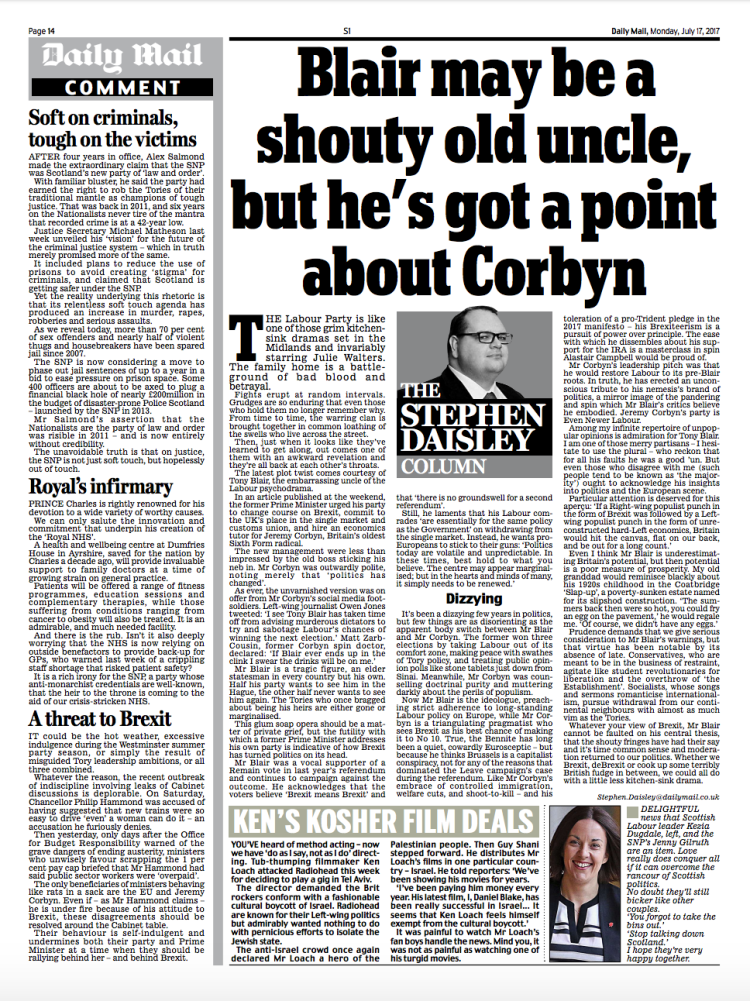