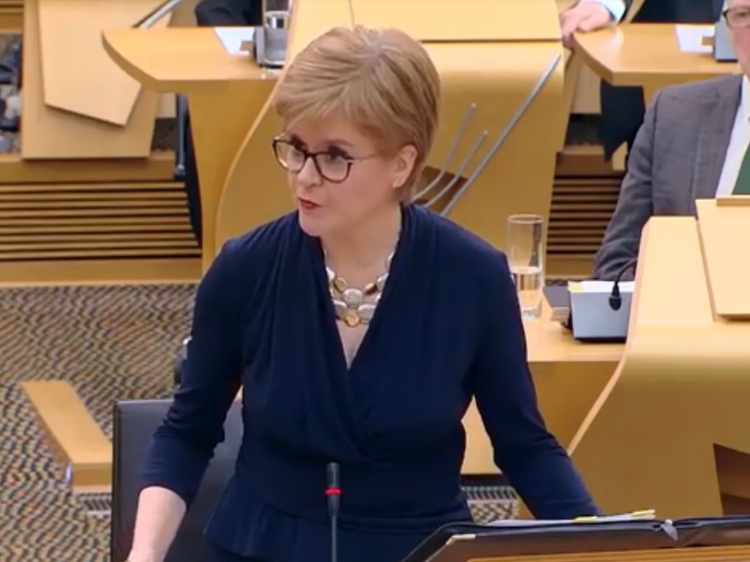 Anyone who watches First Minister’s Questions and still wants an independent Scotland deserves one.

Jackson Carlaw’s weekly waltz with the latest strawman fashioned by the First Minister was made more miserable still by severely inflamed vocal cords. The Tory leader had lost his voice more brutally than those seven seats he misplaced in December.

He rasped out a query about Holyrood’s vote for a review into the state of Curriculum for Excellence. Would the government be respecting parliament’s will and setting up an inquiry? In a most unsporting move, the First Minister announced that, yes, she would be, which took the wind out of the Tory leader’s sails if not the frog out of his throat.

He struggled on all the same, croaking that the inquiry ‘must go beyond simply accepting that some things are going right in Scottish education, and focus on the things that are going wrong’.

‘I can understand this, because it does not suit his narrative, but Jackson Carlaw never engages with the facts that are put forward in the chamber,’ Sturgeon complained. This is the standard Sturgeon Two-Step: dodge a tough question by answering an easier question with statistics that are irrelevant to the original query but sound better than the actual figures.

‘It would be good, once in a while, for Jackson Carlaw to accept the progress that those statistics say is taking place in Scottish education,’ she huffed. For a first minister who has driven down school standards so steeply, she’s never shy about demanding a gold star.

Speaking of people who have wrecked an entire education system, Angela Constance could barely contain herself over Labour leadership contender Lisa Nandy’s suggestion that the UK could learn from Spain’s approach to Catalan separatism. This was ‘a potentially inflammatory and undemocratic position to take‘, Constance prated, as though Nandy had recommended setting the Guardia Civil on Pensioners for Yes.

These people can detect a grievance a mile away. If only we put them to work more productively, we’d still be in with a good chance of finding Lord Lucan, Shergar and the Labour Party’s will to live.

One of the more surreal moments ever witnessed at FMQs came just before the main event yesterday. Gillian Martin, for some wonderful if inscrutable reason, wanted to hear ‘External Affairs’ secretary Fiona Hyslop’s take on tensions between the United States and Iran.

‘We continue to urge all parties to refrain from further violence and to work to de-escalate tensions,’ the minister replied. That’ll do it.

There was something mesmerising about the exchange. Here was Fiona Hyslop offering her solution to the Middle East crisis in between questions about Accident and Emergency waiting times.

Yet, there was Stewart Stevenson two rows back harking intently as though it were the UN General Assembly and he was listening to Henry Kissinger. Hyslop backed the major European powers in ‘raising their concern at the US decision to re-impose sanctions on Iran’ while recognising that they were ‘urging Iran to refrain from further military action and to return to its commitments under the agreement’.

Pity the poor flunky who had to break the news to Ayatollah Khamenei that no less a global power-broker than Fiona Hyslop had warned him to knock this nuclear armageddon business on the head.

As well as make-believe foreign secretary, Hyslop is also culture secretary, so if all else fails she could offer the Supreme Leader a Creative Scotland grant to find a new hobby, or at least start performing his ‘Death to America’ chants in Doric.

Once Middle East peace was out of the way, FMQs was a pretty staid affair.