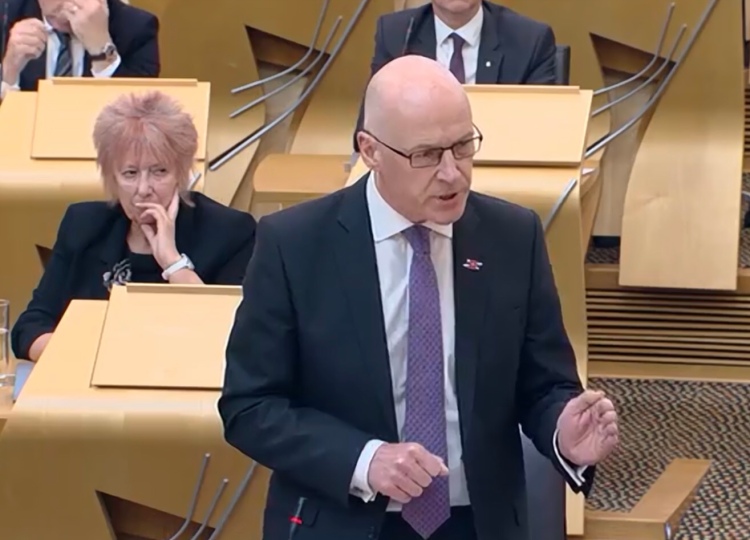 A thunderclap registers at 120 decibels, a fighter jet at 150 but anything above that is John Swinney.

The deputy first minister confuses volume for impact and his parliamentary contributions sound like Foghorn Leghorn suddenly took an interest in the Barnett formula.

Swinney was standing in for Nicola Sturgeon yesterday; the First Minister was in Normandy for the 75th anniversary of D-Day. Party leaders paid solemn tribute to the men who fell and the vanishing few who remain.

It was a solitary sliver of decorum in a brute, boorish First Minister’s Questions. The tone was set by Swinney and the self-pitying keen with which he shielded himself from every criticism — or ‘moanfest’ as he derided them.

Ruth Davidson asked the alleged education secretary about combined classes, in which pupils of different ages are taught together because the SNP is fully funding schools and there’s no resources crisis whatsoever.

The temerity of the woman. Swinney got her telt: ‘I engage with the education system more than anybody else in this chamber.’

It shows. Swinney revealed he had just been at the Scottish Education Awards, the Oscars of the teaching profession, and said it showed how well schools were doing on literacy, numeracy and attainment. If there was a category for Best Supporting Actor in a Fantasy Drama, Swinney would have walked it.

The education secretary touted the Curriculum for Excellence, which he claimed had ‘put power back into our teaching profession’.

Davidson chucked the chalk duster at him and searched around for the dunce cap: ‘I am sure that the schools of Scotland are delighted to hear that they have been empowered by the education secretary into staff shortages and subject choice restrictions.’

Swinney reared himself up, a snarl grown arms and legs, and brayed like the landlord of a downmarket chain pub encountering his first customer complaint: ‘I am not going to take any moanfest from Ruth Davidson on the subject.’

The education secretary was not the first to deploy the term in the debating chamber. That honour belongs to another Nationalist, Bruce Crawford, who, back in 2012, accused Labour of treating Holyrood like ‘a moanfest for negative people who lack positive ideas of their own’. They had asked for more money for college places.

Under its populist veneer the SNP conceals deep wells of entitlement. They think they’re doing us a favour and we ought to show a little more gratitude for their travails. John Swinney is a profile in this very hubris. The concept of accountability offends him; that parents and teachers disagree with him only reinforces his invincible confidence. He is the quintessential SNP minister: one part hopeless, two parts graceless.

Richard Leonard urged the Scottish Government to ‘think about its moral responsibility’ and ‘finally use its powers to protect families in Scotland from the two-child cap’. Was Swinney leaving poor people to suffer to avoid ‘letting the Westminster Government off the hook’?

Quoting his own calculating words back to him was a surefire trigger. ‘What an appalling accusation to throw across the chamber of this parliament,’ John Swinney (2019) fumed against John Swinney (2015).

Lib Dem leader Willie Rennie, who just enjoys trolling the Nats these days, compared Swinney’s strained relationship with the facts to that of Donald Trump, declaring to splenetic Nationalist heckling that the men were ‘two peas in a pod’. The analogy was somewhat overblown. You can hardly compare a divisive, flag-waving demagogue to the President of the United States.

Rennie reminded Swinney he’d been brought in at education as a ‘big-shot troubleshooter’. Three years on, the gun is jammed and Swinney is shouting ‘bang, bang’ and hoping no one notices.