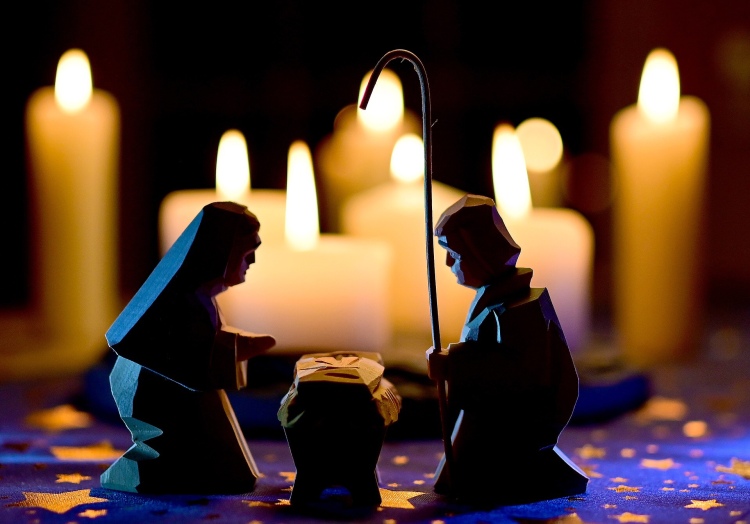 I won’t keep you long this Christmas Eve.

You still have gifts to wrap — or, the men among you, to buy — and that turkey isn’t going to defrost itself. Christmas is that time of year when we’re called on to reflect while going 90mph, as if there’s much opportunity to ruminate on the birth of the Saviour when you’re rugby-tackling a retired sub-postmistress for the last bag of sprouts in Marks.

Even so, it is worth taking a moment to consider the meaning of this one day that we save for all year, plan for three months in advance, and fret over until the last great auntie has been bundled out the door with more sherry than Drake crammed onto the Bonaventure.

Why do we do it? Why do we run ourselves ragged for a solitary day that, if it goes well, will consist of unwanted socks, dry poultry, an inferiority complex about your anorexic twig when Her Majesty’s regal Nordmann Fir glistens on TV, and falling asleep halfway through one of those films no one can agree is even a Christmas movie?

Come to think of it, that old rotter Scrooge may have had a point. Be warned: I have a boiling pudding and a stake of holly and I’m prepared to use them.

This, however, is to miss what Christmas is all about. The blood-pressure spiking, credit-card smiting carnival of commercialism has as much to do with Christmas as foil-encased eggs and giant chocolate bunnies do with Easter.

Christmas is a celebration of humility, love and hope. Those among us who are Christians remember the birth of Christ, sent to redeem the world from its sins, a duty we don’t make any easier year by year.

For me, no one has captured this festival quite like John Betjeman in his evocative verse, ‘Christmas’:

No love that in a family dwells,
No carolling in frosty air,
Nor all the steeple-shaking bells
Can with this single Truth compare –
That God was man in Palestine
And lives today in Bread and Wine.

It’s common for people like me to preach about ‘putting Christ back in Christmas’, as though garish lights and Fortnite gift tokens are the reason the pews are empty. Nothing to do with the wickedness the Catholic Church (and other outfits) have sheltered while sermonising to much lesser transgressors.

The truth is that these professed Christian institutions have forgotten the meaning of Christmas too. The birth of Christ is a parable on the moral grandeur of humble origins — the Son of God was born not in a palace but in a shed in Bethlehem, surrounded by farm animals. No ornate chapels, no golden vestments — just the simple Truth of God made flesh for our sake.

That doesn’t mean you need be religious to appreciate the importance of tomorrow. The story of hope born in 1st century Judea resonates down the ages for those who have no faith or who are downright hostile to belief in the supernatural. Christmas is a time of family and charity — a holiday of obligation in more than just the theological sense. Even the most committed secularist will buy gifts not in expectation of reward but because they understand the joy a token of affection can bring. Christmas is a well-earned rest from selfishness.

The emergency workers who give up their day to keep us safe — the police, the fire brigade, the paramedics and the coastguard — are not limited to those awed by a higher power. Many are guided by a more earthly instinct to be of service. Christmas reminds us that there is a life beyond our little hedgerow and duties that extend past our immediate friends and family.

Few embody these values as vividly as that silent army of charity that mans the country’s food banks. They volunteer their time to the service of strangers, making the lot of those on the lowest wrung a little less wretched. My friend helps run the Glasgow South West food bank and tells me they’ve seen an almost 150 per cent increase in people through their door on this time two years ago.

That is a shameful fact in the world’s fifth largest economy and the burden of alleviating poverty falls mostly upon the state. But, where the state has failed (as it so often does), well-meaning individuals, charities and churches have stepped in. Volunteers are our fifth emergency service and they particularly shine at Christmas because they embody its lessons about humility. The son of a carpenter can save the world and, in their own modest way, community-minded students, clergy and retirees can too.

To understand what has gone awry with the world in recent years, we must grasp that we have lost our sense of proportion. We have become addicted to bigness and excess, believing that only loud words and drastic actions can solve the problems we face. But the world around us — our families, neighbourhoods and communities — are more measurably improved by small deeds. The Sunday morning milk-and-papers run for the housebound lady next door. The couple of hours a week we give to the town’s five-a-side juniors team. Sacrificing that week’s curry to hand in a bag of messages to the local food bank.

Christmas allows us to step back and observe this landscape of subtle decency and when we do, we come to see that the world isn’t as awful as it seems. Rather, the way we talk to and about each other has lost all balance. We no longer debate, we CLASH. These clashes are not won — we DESTROY our opponents, who, somewhere along the way, have become ‘enemies’. A coldness has entered our hearts where love and compassion ought to be.

Politics seems turbulent right now. Mad, even. But the world isn’t going to end. That’s not a counsel of complacency or some misty-eyed yearning for ‘Blitz spirit’ (as if we are facing anything like the doom-laden pall that hung over that fearless generation). It is simply a reminder that, however we speak about politics, it is seldom a matter of life and death.

Brexit may be a honker of an idea and the economic consequences severe but the sky will not fall in. We will swallow our medicine and get on with it. Eventually, we’ll find ourselves back on our feet.

Russian aggression will be with us for some time to come but we made it through the Cold War — when the stakes were far higher — without annihilating one another and with sound statesmanship and a bit of backroom glad-handing and arm-twisting we’ll do the same again.

The economy remains sluggish a decade on from the global financial crisis and we all wish the vice could be loosened an inch or two. There is no silver bullet but, with wise stewardship of the economy and a muckle lot of hard work, we will know prosperity once more.

‘Hope’ can sound insubstantial in a world heavy with problems but, as Christmas reminds us, in ways big and small, human beings have an extraordinary capacity to defy the odds and overcome even the most daunting hurdles. Throughout the year, we are witness to so many incidences of the worst of human nature but Christmas is a time to rekindle the spirit of loving service. To recall that goodness and humility are more abiding than the vices and cruelties to which we can all too easily fall.

Whether you believe God was man in Palestine or such silly superstitions are why there is no peace in Palestine today, Christmas is a time to reflect on what is good, what can be made better, and how love for one another can help us achieve both.