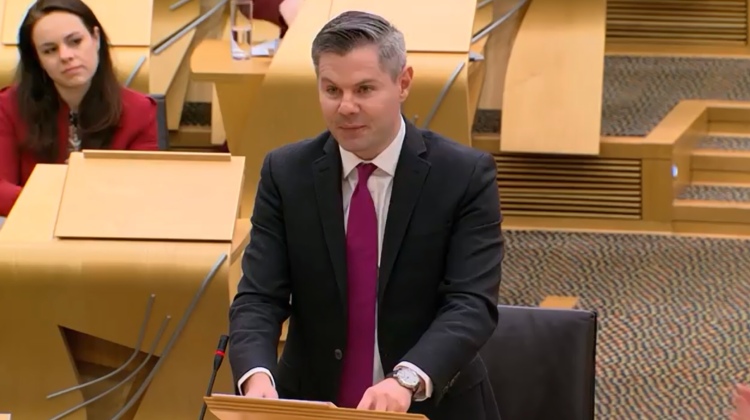 A buzz of excitement crackled through Holyrood as the Budget was handed down.

Not for Derek Mackay’s speech – God love him – but because the proceedings were scored to the whirr-growl-thrum of an orchestra of mobile phones.

Updates from Westminster whooshed in and MSPs jabbed their screens in anticipation of some fresh calamity. By the time Mr Mackay sat back down, the premiership could have passed from Mrs May to Mr Johnson to one of the Strictly finalists.

The Finance Secretary benefited from a warm-up act in the form of Mike Russell, the least effective Brexit minister this side of David Davis’s empty chair – and even that’s a close call. His Pooterish soliloquy quoted from John Maclean (Red Clydesider, not Die Harder) and Shakespeare. Mike Russell is an idiot’s idea of an intellectual and he’s the idiot.

Blessed relief, then, when Mr Mackay took the microphone. Trimly tailored in a charcoal suit, a silver wave swept over his meticulously sculpted hair, the Finance Secretary was sending a none too subtle message: the Brexiteers may be running wild, but here’s a grown-up.

This was his theme. The clanjamfrie of chaos down south versus a Scottish Government getting on with the day job. ‘For the benefit of the Tories in the chamber, that is strong government,’ he jabbed, appropriating Theresa May’s long since abandoned slogan. ‘Some might even say strong and stable government.’

Soon he was having too much fun for his own good, taunting the Tories: ‘The UK Government’s decision to take us out of the EU single market and the customs union, a market of more than 500million people, is reckless and unnecessary.’

The Tory benches could manage only intermittent sputters of ‘Huh’ and ‘Waah’, roughly translated as ‘Sorry, are you the same lad who wants to take Scotland out of the UK single market?’

But Mr Mackay would not be chastened. His Budget was an unrepentantly political exercise and a world away from his nerve-wracked first fiscal statement. His delivery was easy and, in places, light.

His fellow Buddie George ‘Mr Paisley’ Adam asked about more money for Sportscotland, given the minister ‘takes a keen interest in sport’.

He riled the Labour benches over their unfunded demands. At one point, Jackson Carlaw forgot himself, banged his desk in approval, then looked to see if anyone had noticed.

When Pauline McNeill became the umpteenth Labour MSP to urge more spending, Mr Mackay said: ‘If I do it, will you vote for the Budget?’ Every head turned to McNeill, a study in stony silence.

For the most part, the Finance Secretary left the bawling to John Swinney, that seasoned flinger of parliamentary invective, who found a sparring partner in James Kelly, Labour’s Lanarkshire foghorn.

If the presentation was smooth, the content was squeaky. A highly polished spin operation that essayed a sluggish and listless government as thrusting and dynamic.

Much of this involved recycling existing policies and rewording old pledges. The Scottish National Investment Bank was announced yet again. Bonnie and Clyde would have died of old age waiting to rob this joint.

Mr Mackay has a talent for keeping a straight face while getting up to mischief. No tell-tale grin betrayed him as he claimed credit for the UK Government’s city and region deals or when he lamented Westminster cuts to Scotland’s block grant, even as Holyrood’s pocket money has shot up this year.

Never mind. Nicola Sturgeon was by his side, taking time out of her main career as MSP for Twitter, and looked like she was enjoying the show.

What the voters will think of it is another matter. Sneakily, Mr Mackay boasted that he was not putting up tax this year, then slipped in a planned cash grab in 2019-20. Those affected will be somewhat less impressed with his performance than the First Minister.

To them, he’s like a renegade Christmas elf who follows Father Christmas down the chimney and gathers up all the gifts again. Bah humbug.